Dhamaka Movie OTT Release Date: Kartik Aaryan and Mrunal Thakur Starrer Dhamaka Movie is all set to Release Directly on Netflix OTT on November 19, 2021. Story of this film was written by Puneet Sharma along with this Movies Director Ram Madhvani. Its a Pan Indian Movie releasing in Tamil, Telugu and English also along with Hindi. 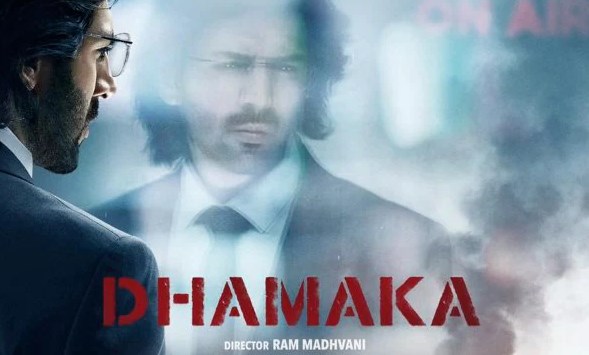 Dhamaka is an Action Thriller Drama. This movie is based on 2013’s Korean Movie “The Terror Live”. Kartik Aaryan Plays the role of a Journalist and host of TRTV Bharosa 24/7. Mrunal Thakur Plays the role of this wife Soumya Mehra Pathak. Story revolves around how Media by Using Advance Techonoly Solves Probelms and at same time how it faces terrorists.

Vishal Khurana Composed Music while Cinematography was handled by Manu Anand and Editing was done by Monisha Baldawa. The rights of this Dhama Movie were sold to Netflix at a rate of around 85 to 135 Crores.

Dhamaka Movie is all set to release on Netflix OTT Directly On November 19, 2021 Skipping theatrical Release. This film will also have a Special Screening through Netflix at 52nd International Film Festival of India to be held from 20th November to 28th November

Dhamama Movie releases directly on Netflix on November 19, 2021. This is first Movie of Actor Kartik Aaryan, Premiering directly on Digital Platform. This movies rights were sold at a very Good rate to Netflix, at around 135 Crores.

Aryan Karthik Starrer Dhamaka Movie is all set to Release on Netflix OTT Directly on November 19, 2021. Keep Visiting Our Website to get Latest Updates On Upcoming New Movie Releases.