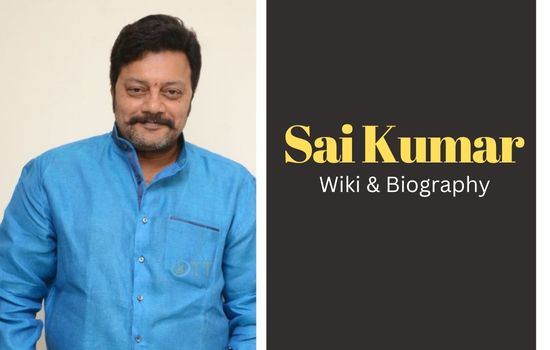 With his work in both Telugu and Kannada cinema, he was honored with three Filmfare Awards and two State Nandi Awards. He has a master’s degree in the arts in addition to his experience in the film industry. He also participated in NCC, at which he excelled. But even as a youngster, he knew he wanted to be an actor.

On July 27, 1960, he entered the world in Vijayanagaram, Andhra Pradesh. Pudipeddi Saikumara Sarma was not his birth name. P.J.Sharma Sr. was an accomplished dubbing artist and actor. In the same way, Sai Kumar followed him after becoming a dubbing artist.

He has an astounding facility with the Telugu language, and his dialogue delivery and diction are both of the highest quality. In the 1990s, he provided dubbing services for top Telugu stars like Suman and Rajashekar. Over time, he developed his own acting career and starred in a wide variety of films. At the moment he was playing supporting roles that were nonetheless crucial to the plot.

Saikumar’s big break came with the release of the Kannada film Police Story in 1996. Saikumar’s career took off after this, and he went on to star in and direct several successful films, including Mane Mane Ramayana (1996), Agni IPS (1997), Police Bete (1997), and Police Story 2 (2000). The actor’s performance as the villain in the 2006 Telugu film Samanyudu earned him both the Filmfare Award for Best Supporting Actor and the Nandi Award for Best Villain.

Saikumar won two awards for the same performance in the Telugu film Prasthanam in 2010: the Filmfare Award and the Nandi Award for Best Supporting Actor. Audiences and critics alike applauded Saikumar and his performance in his 2015 flick RangiTaranga upon its release. For his work in the film, he was honoured with Best Supporting Actor statuettes at both the Filmfare and IIFA ceremonies.

Om Namo Venkatesaya and Jai Lava Kusa were both released in 2017 and featured the actor. Kannada’s version of VIP, a Tamil film from 2014, is one of his 2018 releases titled Bruhaspati. Subsequently, he had a role in K. Raghavendra Rao’s 2018 Tamil drama film Brahmanda Nayagan, alongside Nagarjuna Akkineni, Anushka Shetty, and Pragya Jaiswal. Two of his 2018 works, Kismath and Subrahmanyapuram, have been released so far. Yada Yada Hi Dharmasya, Maharshi, and Suvarna Sundari are just a few of his 2019 publications.

The films Sreekaram, Yuvarathnaa, and Ardha Shathabdham will all be directed by Saikumar in 2021.